Start a Wiki
Aruto Otabe (小田部 有人 Otabe Aruto) is a 3rd year student who is obsessed with Kanoko. He is the Computer Club Leader.

Otabe is the second tallest chracter in the story. He has dark grey hair and thick glasses that hide his eyes most of the time.

In Koi Nashi Ai Nashi it is revealed that the reason he wears thick glasses is to hide his beautiful face from stalkers. According to Hijiri Jouran his looks are on the same level, if not higher, than Tsubaki's looks.

When it comes to shady business or the Computer Club, Otabe can be very serious and sometimes scary, however, if it's about Kanoko, he'll act all lovely-dovey and call her 'Kano-tan'. If Tsubaki is around when he looks for Kanoko, they'll end up having a loud discussion. He is physically attracted to girls with a natural look and flat chests. 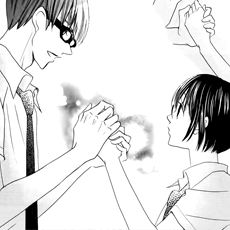 He is obsessed with Kanoko because of her looks. At first, he's a bit worried about her personality because he thinks she is too noisy for him, but when Yabuki shows up asking about his relationship with her, he thinks that if even the stoic Yabuki is interested, then her personality can be overlooked. Kanoko hides every time Otabe is around, however, she won't hesitate to use him when his connections are needed for her schemes.

Otabe is oblivious to Kanoko's attempts to avoid him and talks naturally to her. During the elections, he draws suggestive posters of her that will surely help her get the male votes, and he only shows up to the Sports Festival to shamelessly take pictures of her. He uses his connections to gather all the information he can about her.

When Otabe goes looking for Kanoko and Tsubaki is present, he will ignore 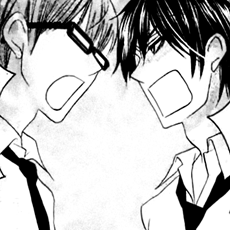 him, causing Tsubaki to explode.

Once in the Student Council, Tsubaki is in charge of the Computer Club issues, to avoid Otabe calling just as an excuse to see Kanoko. 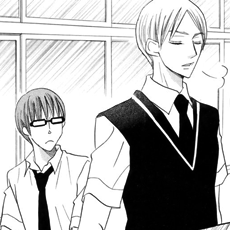 Otabe and Yabuki have been classmates since First Year. When Otabe first saw Yabuki, he thought that his looks were perfect; he was small with white skin and a serious and quiet aura, so overlooking the fact that You is a man, he proposed to him but was turned down because he was only 15 and wouldn’t break the law, among other reasons. While waiting for him to turn 16, You grew up and Otabe’s affections stopped. After hearing him mention his younger sister, Kaede, he became excited to meet her, only to find out that she didn’t look anything like he did in their first year, because of this, Otabe claims that he was betrayed by Yabuki.

Yabuki thinks Otabe is troublesome and even helps Kanoko to get away from him when he’s chasing her. They only seem to talk when they have something to discuss; like Kanoko’s relation to Otabe, the space Otabe was occupying by lying down in their year’s section or the pictures he was taking of Kanoko during the Sports festival.

When Mizukami realizes that Yabuki is concerned about the upcoming 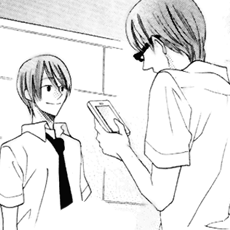 elections, he makes a deal with Otabe in which Otabe will run for the Presidency in exchange of Mizukami doing his extra school work, knowing that this way Yabuki will run as well to stop him from winning. When Mizukami brushes his hair differently and wears glasses, they look alike enough to fool some people. Otabe thinks Mizukami enjoys manipulating others.
Retrieved from "https://koidanoaidano.fandom.com/wiki/Aruto_Otabe?oldid=4917"
Community content is available under CC-BY-SA unless otherwise noted.