You Yabuki (矢吹 葉 Yabuki You) is the Student Council President and is initially very suspicious of Kanoko. He has gained a lot more respect for her as she has displayed her extraordinary skills and capability.

He has light gray hair and eyes. Yabuki is rarely ever shown with a smile. Because of his good looks, girls are constantly seen blushing around him. One of Yabuki's parents is a quarter italian, but it's not stated if he has any foreigner features himself.

He appears to be very stoic and doesn't seem to be very sensitive towards others. Yabuki talks to others in a business-like and blunt manner. He does not like to associate himself with illogical people. He tends to look down on others; he was condescending towards Kanoko when he thought she was incompetent, but quickly realized he was the arrogant one when she proved him wrong. 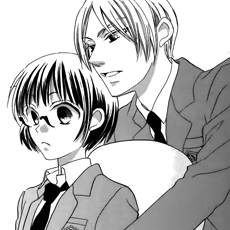 Yabuki is one of the first to discover that Kanoko is the mastermind behind the Newspaper Club, after that he regards her as someone suspicious and is cautious when she is involved. When one of Kanoko's schemes backfires and Otabe is allowed to run for President even though he's a senior, Yabuki and Kanoko reluctantly join forces to ensure Otabe won't be elected. Yabuki wins the election and Kanoko is elected as Secretary, once in the Student Council, Yabuki assigns her a task that according to him she won't be able to complete and should teach her a lesson. When Kanoko successfully completes the task, he realizes he's been arrogant and apologizes, telling her that he will think of her as "the unique Kanoko Naedoko" from now on.

After the sports festival, Yabuki is shown to have an interest in Kanoko and wonders if she's scared of him because she never smiles when she's talking to him.

When Naedoko starts working during her breaks to finish her Student Council tasks earlier, she meets Yabuki in the Student Council Room working on fixing all the loopholes in the school's policies. At first they don't talk about anything other than work, but when she finds him still working late after classes, she tells him that he should use his remaining time in school for himself instead of working too much. During that meeting they smile and talk frankly to each other for the first time. The next day, Yabuki asks Kanoko to have lunch with him, now that he doesn't think she's scared of him, he tells her he won't hold back anymore and wants to talk with her more often. They exchange mails and decide to eat lunch together the next day.

Yabuki confesses to Kanoko after spending some time together at the Library and Student Council room, and realizing he has a romantic interest in her, after this, she faints. When she wakes up, she calls him out of his classroom and rejects his confession, Yabuki then tells her he didn't expect the first confession to go well either, leaving Kanoko to wonder what he meant with that. 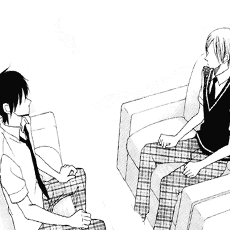 him as a cover for her moves.

Even though Yabuki told Tsubaki to stop meddling in Kanoko's affairs, they don't seem to be on unfriendly terms and even help each other during the elections, after that, their interactions are minimal until Yabuki gets closer to Kanoko and finally confesses to her.

When Kanoko is in the nurse's office after fainting, Yabuki tells Tsubaki that he sees Kanoko as a girl he likes and ask about his feelings for her. Tsubaki admits to liking her since middle school and Yabuki smiles and tells him it was expected, because after spending time with such an interesting girl one couldn't help but to fall for her. Yabuki then asks Tsubaki to tell him more about Kanoko during her middle school days.

Tsubaki feels defeated for the first time and thinks that he acted in an uncool way when he told him for how long he had liked Kanoko, as if that was a reason to have a claim on her. After seeing the way Yabuki reacted and the way he's approached his feelings for Kanoko, Tsubaki thinks there are people out there that are worthy of Kanoko, when he thought he was the one who deserved her all along. In that moment he realizes how conceited he's actually been. 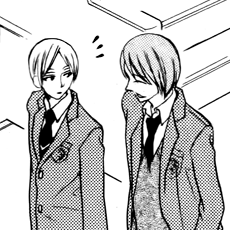 Mizukami is Yabuki’s closest friend and refers to him as “You-chan”. They met when Mizukami overheard Yabuki rejecting Otabe’s proposal and Mizukami thought the reason Yabuki gave was interesting, so he started talking to him.

They seem to know each other well and go home together after school. He is the person Yabuki trusts the most, and it is shown when he discussed strategies openly with him in the room, and wanted him to become his vice president.

When Mizukami tells Yabuki he didn't entered the Student Council Room on purpose so he and Kanoko could be alone, Yabuki tells him he's interested in Kanoko, but not in the way Mizukami believes. Mizukami refutes this saying he looks at her with affectionate eyes and Yabuki tells him he also looks that way at Mizukami. Mizukami is surprised by this and Yabuki lets him know that he's always keeping tabs on him hoping to see him striving hard at more things. Mizukami is too embarassed to say anything after that.

Otabe and Yabuki have been classmates since First Year. When Otabe first 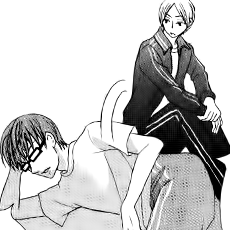 saw Yabuki, he thought that his looks were perfect; he was small with white skin and a serious and quiet aura, so overlooking the fact that You is a man, he proposed to him but was turned down because he was only 15 and wouldn’t break the law, among other reasons. While waiting for him to turn 16, You grew up and Otabe’s affections stopped. After hearing him mention his younger sister, Kaede, he became excited to meet her, only to find out that she didn’t look anything like he did in their first year, because of this, Otabe claims that he was betrayed by Yabuki.

Yabuki thinks Otabe is troublesome and even helps Kanoko to get away from him when he’s chasing her. They only seem to talk when they have something to discuss; like Kanoko’s relation to Otabe, the space Otabe was occupying by lying down in their year’s section or the pictures he was taking of Kanoko during the Sports festival.

Yabuki and Sayuri were competing against each other during the elections, but now they're both part of the Student Council.

Hijiri thinks there's no way they could be friends. They don't trust each other.

Retrieved from "https://koidanoaidano.fandom.com/wiki/You_Yabuki?oldid=4813"
Community content is available under CC-BY-SA unless otherwise noted.